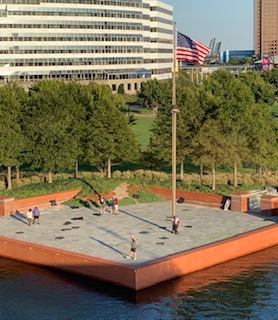 This fall, Joe and I had the opportunity to travel to Norfolk, VA, never realizing that the Naval Station at Norfolk is the largest naval installation in the world!

Before our boat harbor tour began we found this incredible tribute to our Veterans – The Armed Forces Memorial located just off shore by the marina.

This memorial is located on the river which has carried more than 200 years of servicemen and women off to war and returned home. (Some not that fortunate).

Within this memorial there are 20 inscriptions from letters written home by US service men and women who lost their lives.  Every branch of the service is represented.

These letters, written not knowing their future, contain very personal thoughts of love of family, love of country, the hell in war, and reflections of life itself. “What’s it all about?”

The 20 letters have been cast on sheets of bronze and are scattered across the memorial on the ground as if they had been blown there by the wind.

The airmen, infantry men, nurses, sailors, men, and women representing every branch of the service, bare their souls struggling with their loves, hopes and fears.

They represent brave men and women from these wars:

Walking around reading letters that read like a personal diary you feel like you’ve peeked into someone’s soul, so intimate and so touching especially knowing that these brave soldiers never made it home.

Reflecting on the courage, doubts and hardships captured by these letters let us remember most vividly that freedom isn’t free.

God bless and protect our service men and women.

Do you struggle with just the right words in your prayers? Patty’s FREE ebook will give you just the right start.” Just sign up below to get instant access. 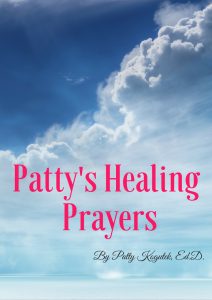